LCB Depot, Leicester (in cafe-bar window facing Rutland Street & inside cafe-bar), and in the UK pavilion at Dubai Expo 2020

In this installation, artificial intelligence is used to reveal another place to the audience, creating an indelible link between Leicester and Dubai.
Cities Tango : Leicester+Dubai displays images of and from each location. Images are dynamically revealed within an otherwise abstract structure. A set of local photographs are interlaced with colour stripes and shown in the other city. Each city, and the people in them, interact with one another across time zones. The colours, stripes and timings used are driven by movements at each location. Immediate responses to rapid movement are seen by the audience in each location. In each place there is a screen which is interactive, using a computer and camera, showing an ever-changing blend of colour bands and images from the other city (connected over the Internet). A second, urban, screen in each city shows that location’s Cities Tango images.

What is seen depends on the movement of people in front of the display and on what is happening in the twin city. In each location the work reacts to detected motion. At the same time, analysed image information is sent over the internet to the other location to further influence the work’s behaviour. Cities Tango also evolves over time as a result of the detected movement of people. It uses AI in two respects. Pattern recognition drives its direct responses to movement and a rule-based system drives the evolution of the colours and behaviour. The evolution develops as a result of the history of the movement of the audiences in both cities. Dubai influences Leicester and Leicester influences Dubai in a tango danced between the two cities. 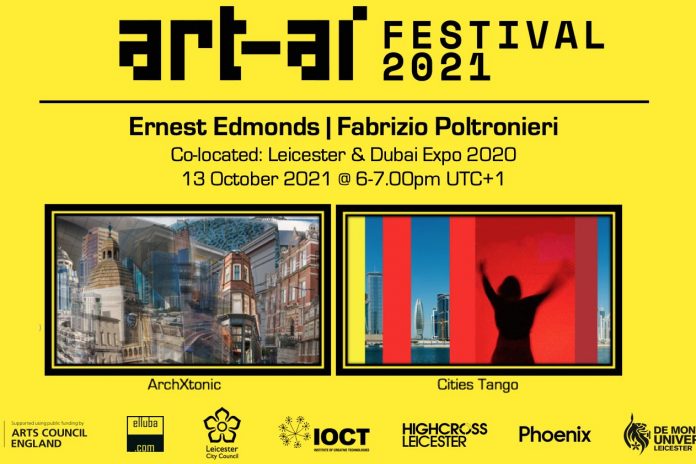 Online via Zoom/livestream on the night, on YouTube after 13 October

Two of the Art AI Festival exhibiting artists, Ernest Edmonds and Fabrizio Poltronieri, discuss their co-located artworks being shown simultaneously at the Dubai Expo and venues in Leicester.